The History of Pilot Mound
In 1878, the first settlers from Ontario came west to this area, spending the winter in small shelters at Barbour's Lake, a few miles from the present town.
In 1881, a town site was chosen, on the slopes of the 116-foot high Mound, an elevation visible for up to 16 miles. It was a prominent landmark, a beacon to the wagon trains as settlers crossed the prairies.
Here it was that a well-planned town site was laid out with hundreds of lots being sold. (Click here to see the lot plans, who bought them and how much they paid!) Businesses, a church and a school, as well as private dwellings soon appeared on the Mound. The town was incorporated and the future looked bright, even attracting a visit by Sir John A. MacDonald who addressed a political rally on the slopes of the Mound in 1885, on his only journey to the West.
However, when the CPR Railway skirted the town by a mile, there was nothing to be done but move all the buildings to a new site and reincorporate again in 1904. Soon only the stone bank vault remained on the Mound, as evidence of the former Town. It is still visible to this very day.
The Old Mound, as local people affectionately call it, is one of the most important historical landmarks in this province. Geologists tell us that it was the result of an upheaval of natural gas as opposed to a formation left by the last Ice Age. It has on its summit the remains of a small circular hill, which, authorities state, was built by ancient Mound Builders. In 1908 a Professor Montgomery of Toronto University directed excavations, which unearthed relics of Mound Builders, who would have considered it a temple or holy hill.
Pilot Mound was in the heart of Indian country in the days of the Hudson's Bay Company. The Plains Indians called the Mound "Little Dance Hill" (Mepawaquomoshin). They came great distances to hold their ceremonial dances on its summit.
During the first half of the 19TH century the area was well known to the buffalo hunters of the old Red River Settlement. Various clashes resulted between the buffalo hunters and the Sioux with a fierce battle being fought on the northern slopes of the Old Mound in the mid 1850's.
The buffalo hunters were camped at Barbour's Lake preparing to hunt a large herd of Buffalo, which was located in the area and had driven them northward to the edge of the bush. Finding two of their members missing and their horses and rifles gone, it was later learned the Sioux had killed them. As night was falling the hunters returned to camp.
The next day, a beautiful September Sunday, the hunters advanced in strength toward the Mound. The Sioux were assembled a little over a half-mile north of the Mound. Here the battle took place, a running fight, on horseback in Indian style, which resulted in the complete wiping out of the Sioux. Five hundred and ninety-seven were killed and buried on the western slope of the Old Mound. Two survivors were allowed to carry the story of the massacre back to their people. When the fight was over there were 1500 buffalo hunters on the Mound.
A party of Sioux came up from the south during the early days of white settlement and carefully examined the burial place of their people on the slope of the hill. In recent years, descendents of the slain warriors drive from Belcourt, North Dakota, to hold a memorial ceremony on the Mound each fall. They welcome local people to come with them as they walk over the Mound, hold a smudging ceremony, scatter tobacco and offer food for the spirits of their ancestors.
The mysteries of the Old Mound continue to fascinate and unfold.
A recent book entitled "The Vinlan Calendars" by ex-Manitoban John Samson, suggests that the mounds on top of the Old Mound were not burial mounds but remains of astrological observation cones built of sod. These allowed the Aztecs to accurately navigate the globe, and also the Druids and Vikings, using archeological astronomy, possessed the navigational knowledge necessary for global navigation, making many trips to the Americas.
With the town almost in its shadow, the Old Mound remains shrouded in mystery - an important part of our heritage.

OUR CLAIM TO FAME: 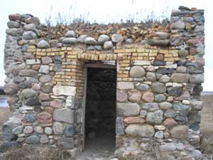